How Big is Alaska?

Alaska is America’s 49th state and undeniably one of the country’s top places to visit, especially for nature’s admirers. People come from all over to explore miles upon miles of lavish landscapes filled with forests, lakes, mountains, and North America’s tallest peak, Denali.

Alaska is the largest U.S. state and is so big if you combined Texas, California, and Montana, Alaska is still bigger! At 1/5 the size of the lower 48 states, Alaska is massive.

Its nickname “The Last Frontier” appropriately describes it with its numerous little towns. Some of these towns have under 500 year-round residents who make them some of the most distinct and secluded vacation destinations. On our visit, we met several people whose enthusiasm for Alaska was unbelievable, and the way they lived their lives was astounding.

As part of our cruise/tour, we stayed overnight in Talkeetna. While it sounds a bit “cheesy,” our tour director recommended we take the “gold-panning” tour. He promised us it would be amazing, and it delivered. Our gold-panning tour leader authentically worked for gold mining companies, was a first-responder in urgent situations, hunted for bear and moose, and built his own house. His wife hunted flowers and herbs for medicine and regularly helped strip down a carcass for food. The stories they told!

He always had his emergency pack ready if he was dropped into the wilderness or on Denali. One time he was helicoptered up to Denali to do a rescue. While dangling from the helicopter, a white-out came upon them. The pilot made an immediate decision to cut the rope and dropped our guide into the snow. Everyone survived. Did you know Spring bear tastes better than Fall bear? As a hunter, our guide explained the bears eat a lot of garbage in the Summer and are fatter. Spring bear is better since they didn’t have much garbage to eat, the bears are leaner, and the meat tastes better. 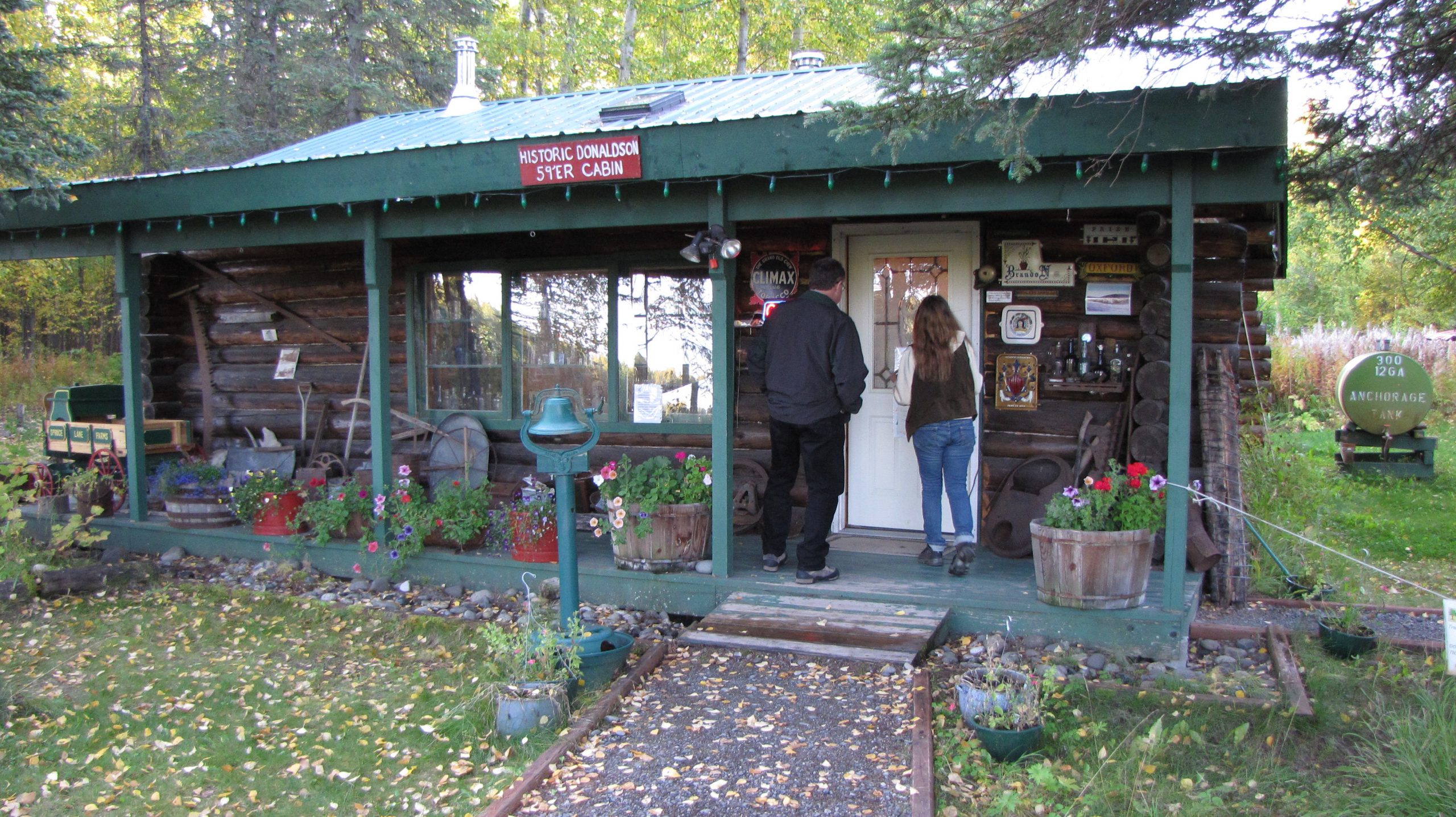 Touring a homestead, we learned about the many Michiganders who came to Alaska in 1959 to claim a homestead. They had to build a suitable place to live (no tents), cultivate part of the land, and live there for five consecutive years. Challenging, but they did it. 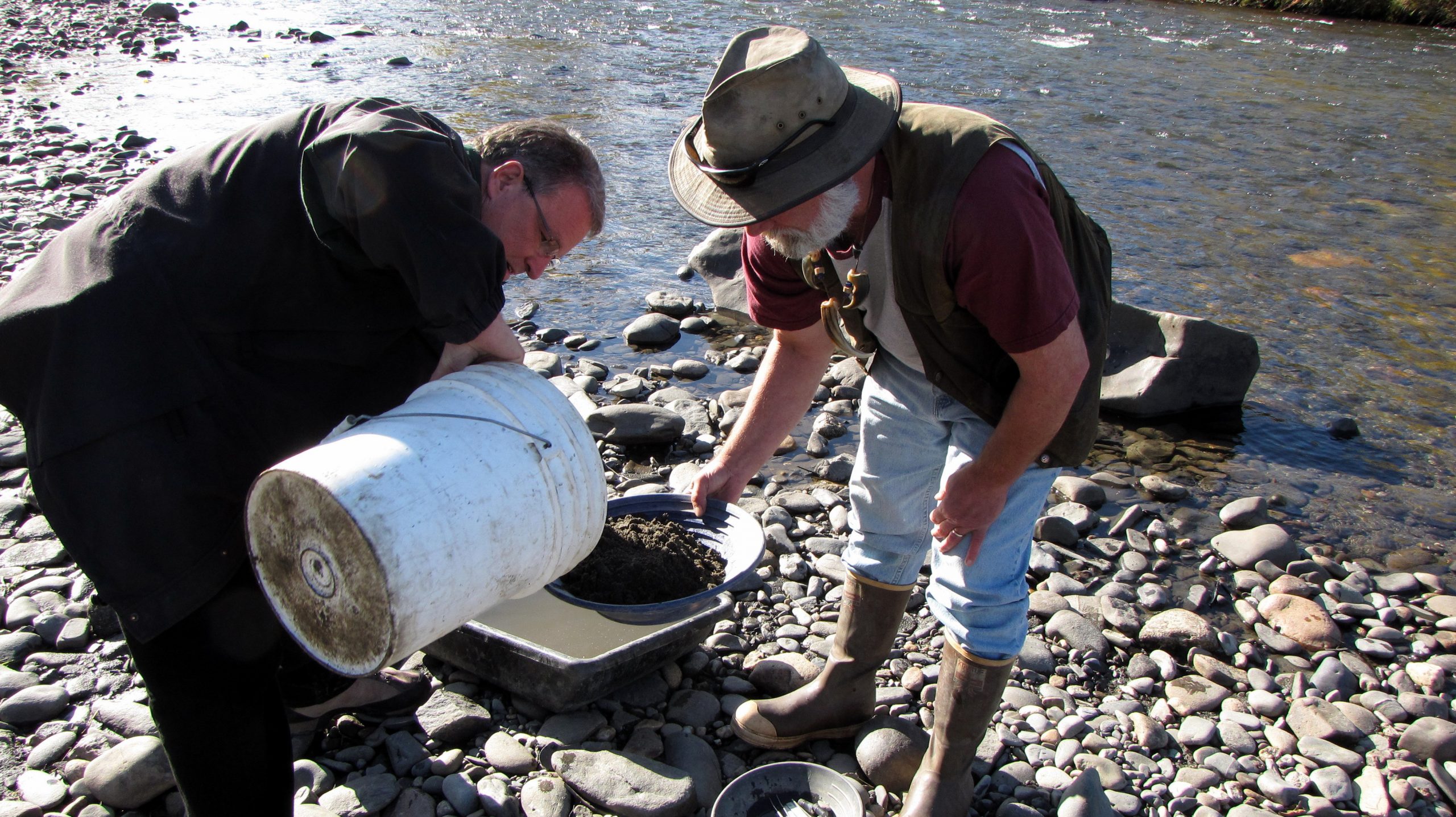 Charlie and our guide panning for gold. Image Cindy Dykman

From there, we traveled to the river to pan for gold. My imagine had us at a touristy joint with water flowing down a trough. We were the only ones at the river. We were not sure we mastered the exact motion of panning, but we discovered a “clinker,” which we still have. 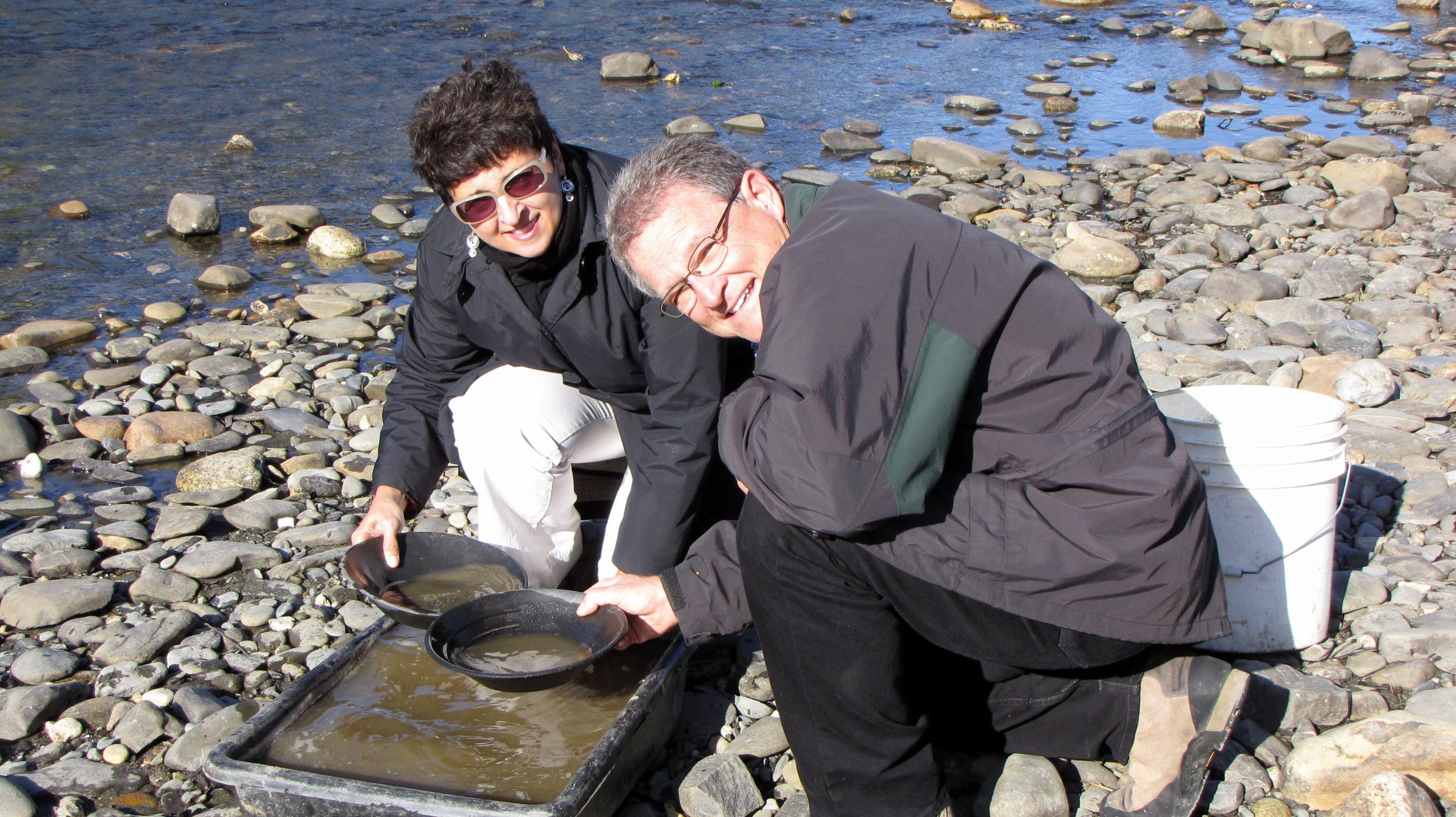 We found gold and a small garnet too! Image Cindy Dykman 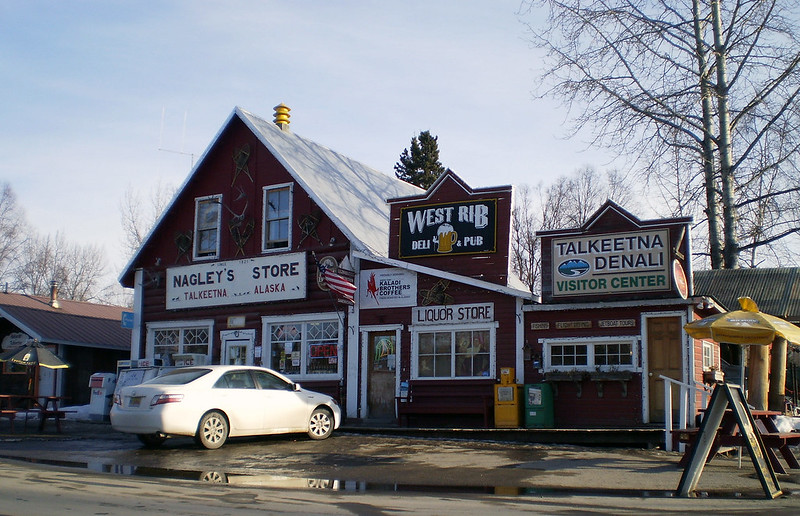 Talkeetna is a small town and serves as a base for people attempting to climb Denali. The creators of the television show “Northern Exposure” were inspired by Talkeetna when creating the show. Rustic and charming, you want to stay here to soak up the pioneering spirit. While there, we met up with a friend of my brother-in-law. She recently had bought a plot of land and had a small cabin on it. Unfortunately, the cabin was in the middle of a bear patch, so she always had her rifle ready when going home. 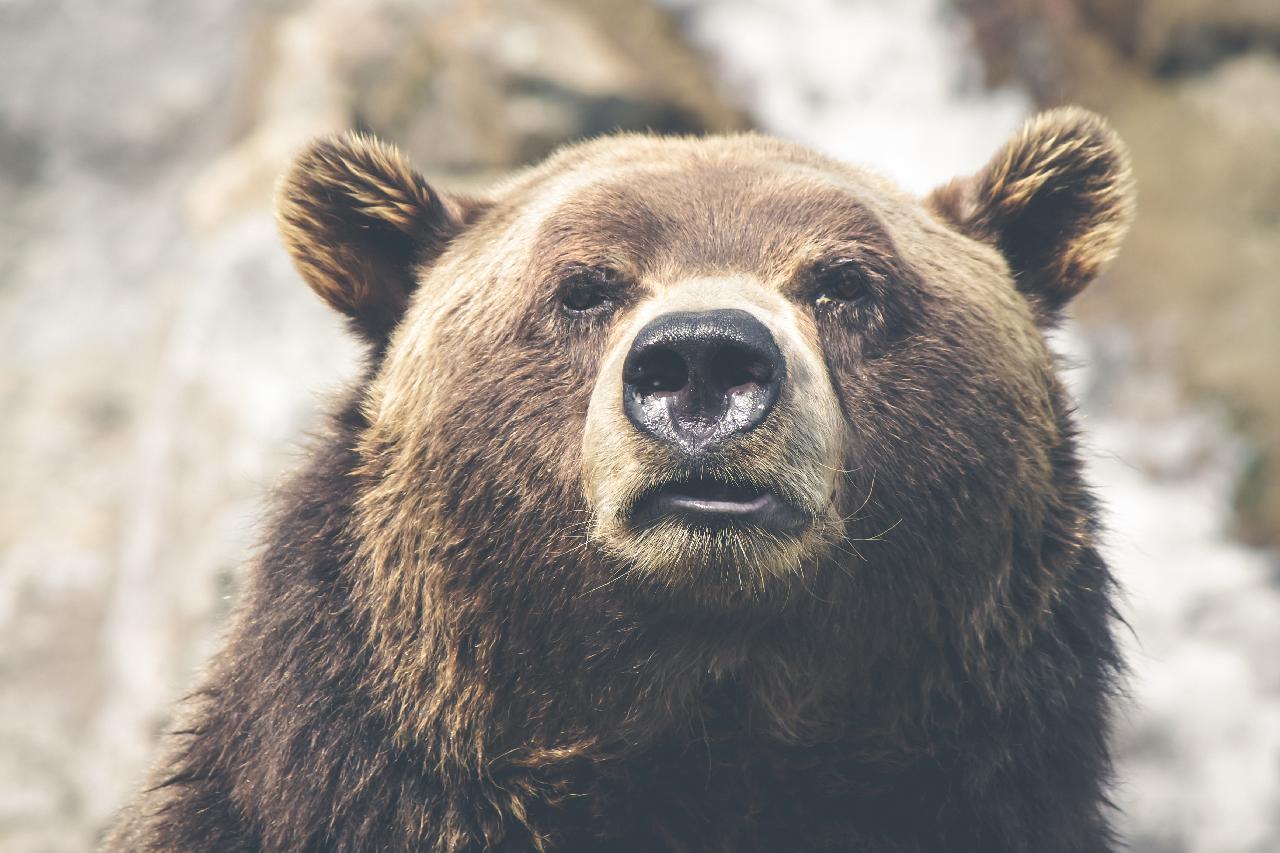 Imagine finding this bear on your doorstep?!

She told us a story of how some advice she had received saved her life. The previous fall, she rode her snowmobile over to someone’s house for dinner. Along the way, she crossed a river. Just as she reached the opposite river bank, the snowmobile cracked the river ice. Since she always traveled with her sub-zero degree rated sleeping bag, she pulled it out and remembered my brother-in-law’s brother had told her to take her boots and socks off if they get wet. She pulled them off, snuggled in her sleeping bag, and survived. Now you know, always take off your boot and socks if they get wet in the cold and put your feet in the dry sleeping bag. 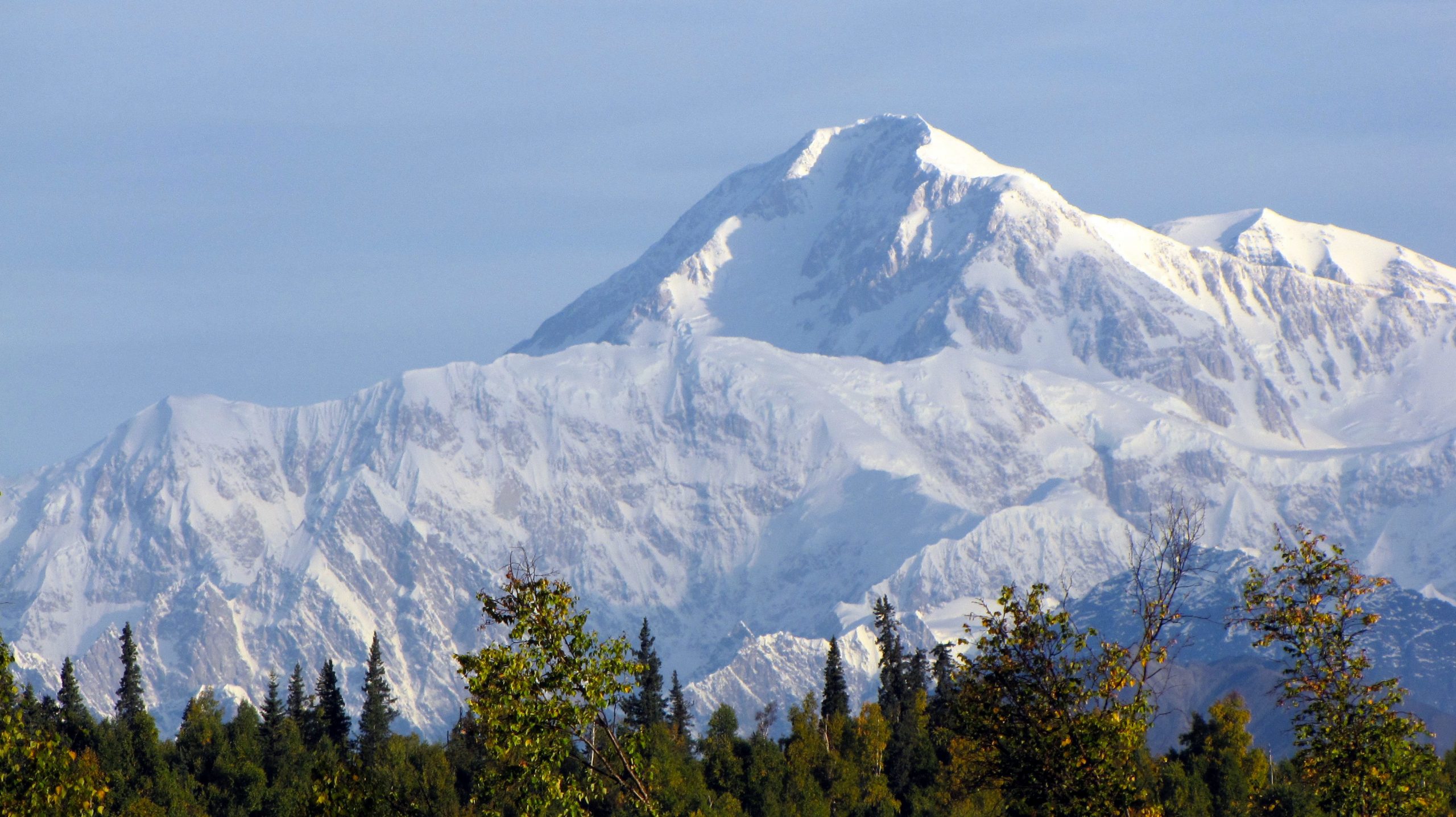 The tall granite steeples and cold, snowy summits of Denali National Park and Preserve sit atop 160 miles of the Alaska Range and exhibit so much elevation they are often lost in the clouds. My advice is to get up early to see the sun hit the majestic peaks. Commanding this skyline is North America’s highest peak; Denali ascends gloriously to 20,310 feet and is one of the most impressive sights in Alaska. Around 400,000 fearless travelers come to visit the national park yearly, basically between late May and early September. The National Park Service offers various ways to see Denali, including three narrated bus tours led by trained naturalists. At eight hours, the Tundra Wilderness Tours provides the best opportunity to see wildlife. The shorter tour gets you to the first gate of the park and doesn’t offer you much wildlife viewing. Do not bother with that one. When we were told we were going on a retrofitted school bus for eight hours, I thought it would be misery, and it was far from it. Our guide made it fascinating!

With a degree in geology, our naturalist guide was the most enthusiastic person about rock formations and wildlife. His dream was to work in Denali, and he was so excited every time wildlife or a fantastic scene unfolded before us.  Also of pioneering spirit, our guide shared with us how he built his one-room cabin himself, including his outhouse. His wife was pregnant with their second child, so he promised her an indoor bathroom. Before she gave birth, they would rent a motel room in Fairbanks for a couple of weeks to be closer to the hospital. This young man’s enthusiasm for connecting with nature every day and the joy it provided far outweighed the inconvenience of indoor plumbing. He was the reason for our memorable tour. (It could have been the bears eating Fall berries too!) 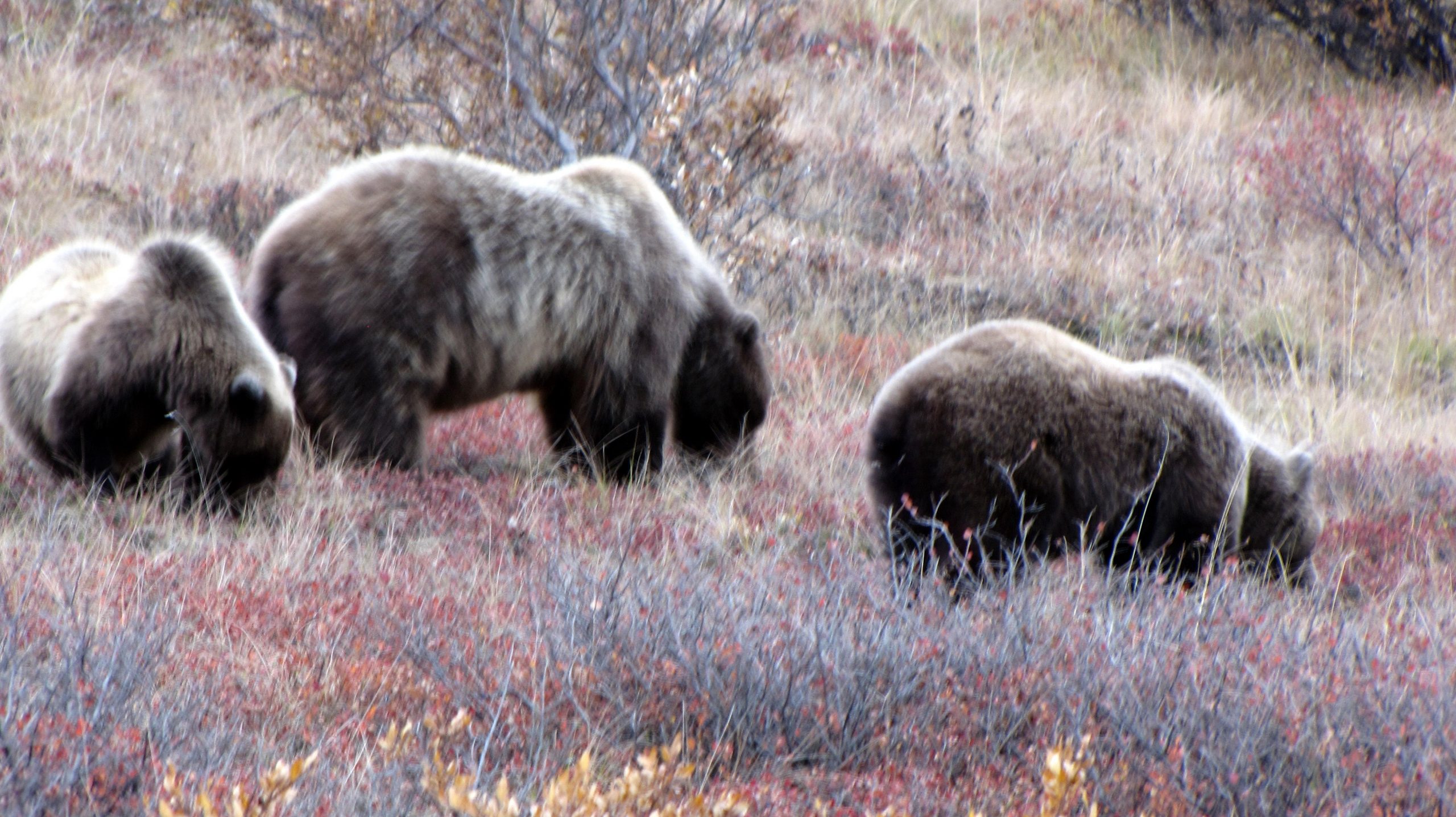 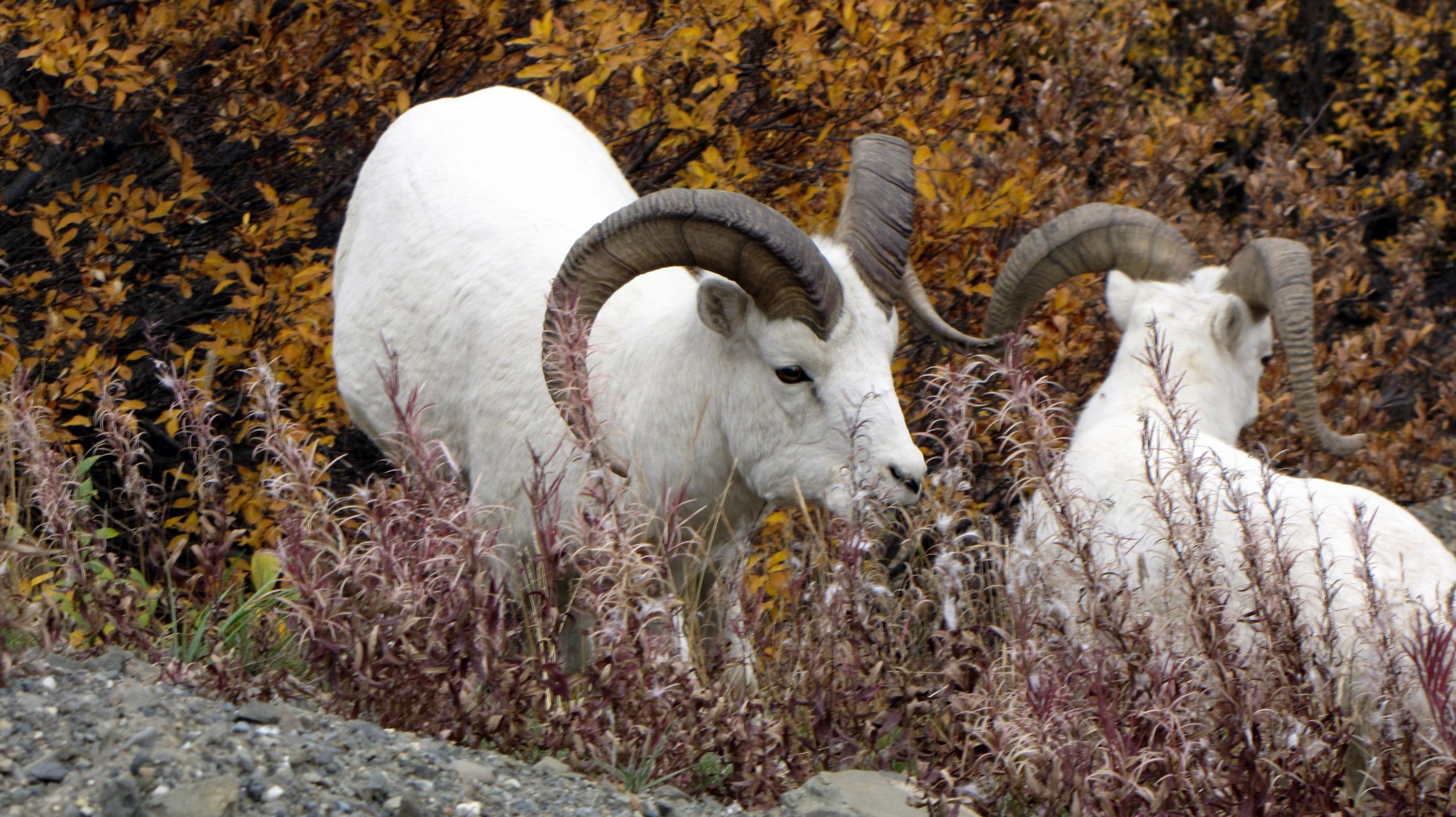 Every Alaskan city also has its beauty and character and a bit of enigmatic Alaskan wilderness. Alaska’s history is teeming with gold miners, American Indians, adventurers, and wildlife enthusiasts. The state preserves its appeal year-round, despite some extreme weather. It’s got you covered from island escapes, essential salmon fisheries, historic gold-rush preservation, and every breathtaking outdoor adventure you could want!

Our new pioneering friends told all of these stories and more within a two-day period of the land portion of our vacation to Alaska. I encourage everyone, young and old, to go to Alaska, meet these modern-day pioneers and enjoy the breathtaking majesty of Alaska. Need some help planning your Alaskan vacation? Give me a call, set up some time. I can’t wait to tell you more stories!