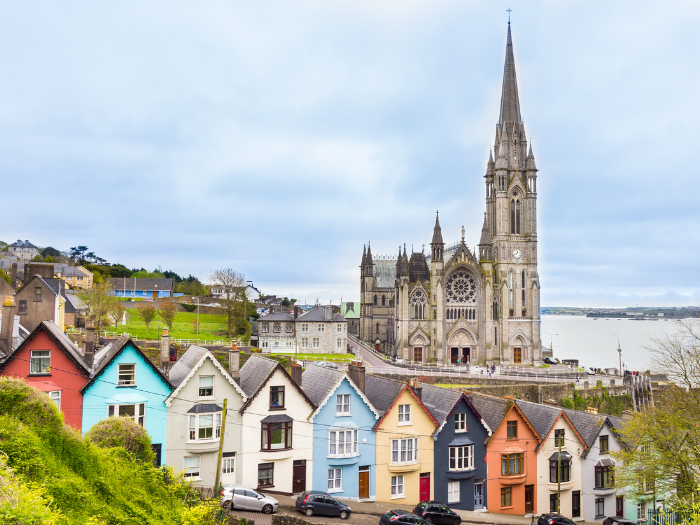 Historic Cobh, Ireland, the start of many emigrant’s journey to North America

Ireland’s emigrant history spanned the 18th, 19th, and 20th centuries, where Irish men, women, and children left the country searching for a better life. The descendants of those emigrants from all over the world, seeking to reconnect with the origins of their Irish ancestors, make Irish genealogy and ancestry a very popular pursuit.

Due to a long legacy of emigration from Irish shores, tens of millions of people in North America are of Irish descent. Many museums in Ireland pay tribute to and explore the experience of those who left. Here are some of the favorites: 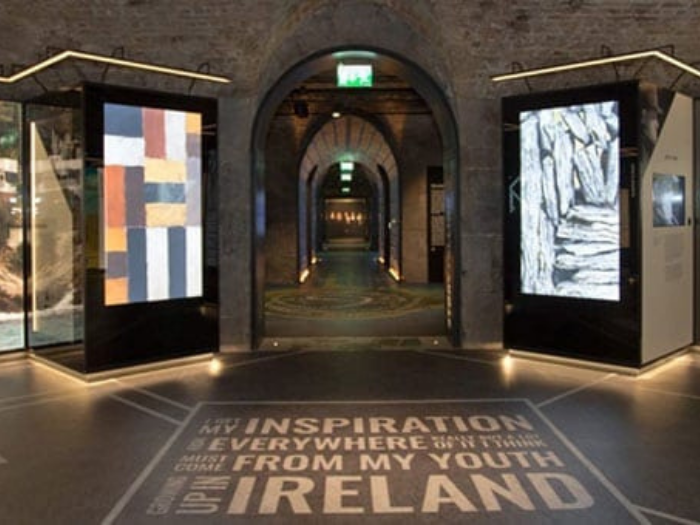 EPIC The Irish Emigration Museum is a shiny, high-tech wonderland – the first all-digital museum in the world. While there is a lot of technology in this museum, it also has a lot of heart. EPIC is all about the stories – of the 10 million Irish people who left, where they went, and what happened to them. Twenty galleries detail the history, heritage, and culture of the Irish diaspora. It’s a wonderful introduction to the vast global scale of the Irish diaspora.

See emigrant letters, experience Irish music and dance, meet the outlaws in the Rogue’s Gallery, hear the words of some of the world’s most famous authors in the Whispering Library. You can even begin exploring your history with a consultant with a professional genealogist. 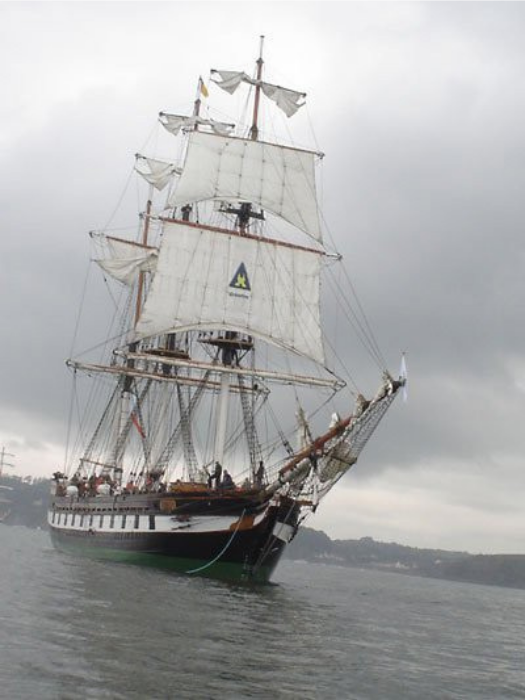 Located just over two hours from Dublin and close the Waterford, The Dunbrody Famine Ship is a faithful reproduction of an 1840s emigrant vessel that carried weary and hungry refugees fleeing Ireland’s Famine. A potato blight started The Famine in 1845, which killed the staple crop of the impoverished Irish tenant farmers. Within seven years, 1 million people died, and 1.5 million had emigrated. As Irish people fled throughout the world, the Irish Diaspora was taking on new dimensions.

The Dunbrody launched as a cargo ship in 1845. Due to the intense demand, she was refitted and would carry thousands of desperate tenant farmers across the ocean to Canada, most in overcrowded steerage. While many of the millions who crossed the sea in that era died, the captains of the Dunbrody took good care of their passengers and had a low mortality rate. When you visit the Dunbrody, you’ll hear the story of famine emigration from the perspective of those who left, bringing you from the quayside of New Ross on the long journey to the Arrivals Hall in North America. 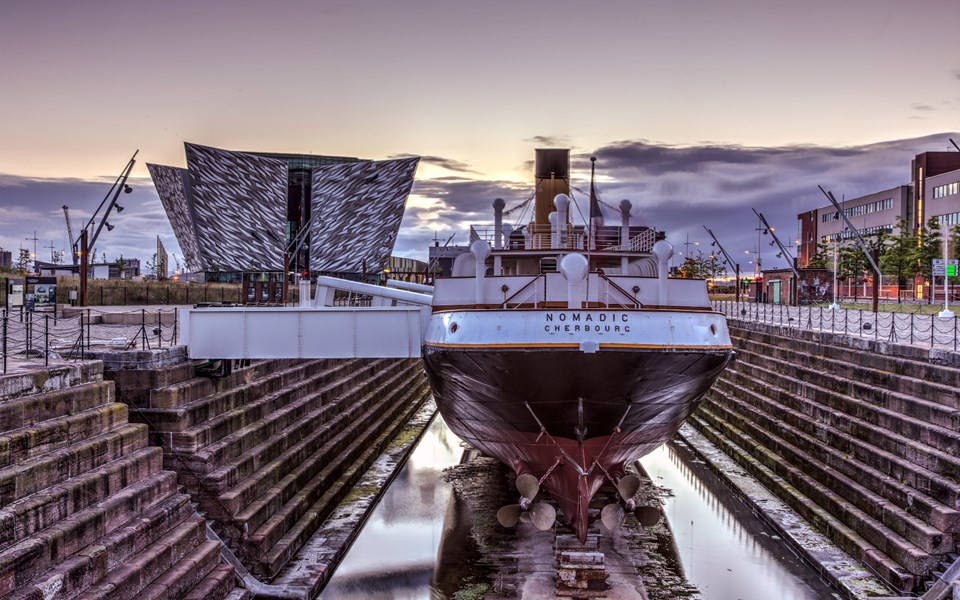 Ireland’s emigrant history must be told with the story of the Titanic. The ship’s full name that became the world’s best-known maritime disaster was actually “Emigrant Ship Titanic.” The Titanic was built at record traffic west across the Atlantic as emigrants crossed the ocean to start new lives. While much attention is often given to the doomed glamor of the first-class passengers, the ship was built to accommodate the many ordinary people who needed third-class transport for more practical ends. As documents on the ship at the museum note, “Titanic stands not only as one of the worst disasters at sea but also as a memorial to the zenith of mass migration across the world’s oceans.” The era of the great liners would soon end, as the US’s war and declining immigration numbers made such large ships impractical.

Visit Titanic Belfast today for insight into the ship’s creation in the Belfast shipyards, view a simulation of the ship’s launch, explore artifacts and imagery related to the luxury experienced by the first-class passengers, walk the decks on the maiden voyage and explore the aftermath of the disaster. 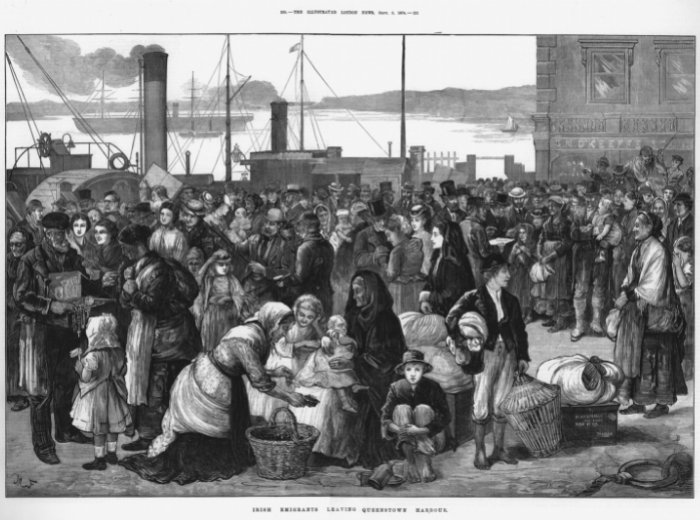 Emigrants on the docks at Cobh prior to travel.

The Cobh Heritage Center tells the story of hundreds of years of Ireland’s emigrant history. The story began in the 1600s when the Irish were transported to the British overseas colonies like Virginia, New England, Barbados, Jamaica, and Montserrat. The port of Cobh, then known as Queenstown, became the departing point through which millions of emigrants would catch their last glimpse of Ireland. Between 1848 to 1950, 2.5 million of the six million people who left Ireland departed from Cobh.

There are many fascinating stories to discover at the heritage center. Explore life on board a so-called “coffin ship” and a ship bringing convicts to Australia. Exhibits detail the stories of the seventeenth-century local man Francis Barret, famed pirate Anne Bonney, smuggler Robert Davies, and more. Learn about Annie Moore, who departed the port in 1891 and became the first emigrant to be processed at the newly opened Ellis Island in New York. You’ll also explore how the Titanic left Queenstown on her first and final voyage with 1,308 passengers and 898 crew members.

Are you looking to trace your Irish roots? Want to know more about Ireland’s emigrant history? I can help! I work with several companies with renowned genealogists.

If you are interested in Irish genealogy, don’t be put off by misinformation about the destruction of records. Instead, prepare for a fascinating journey that may be frustrating at times but is ultimately rewarding. Some of the stories often contains stories of tragedy and triumph. If you have no information of your ancestors in Ireland. That is okay! The genealogist can trace back from records from the burial location of your ancestor in North America.The companies I work with can put together a specialized Trace Your Ancestry itinerary using expert genealogists. In essence, this means that they do all the groundwork and help you find your ancestral home in Ireland. Your ancestral home could be a ruined cottage in a field or a castle on a grand estate! The beauty is in the discovery and the revelation. 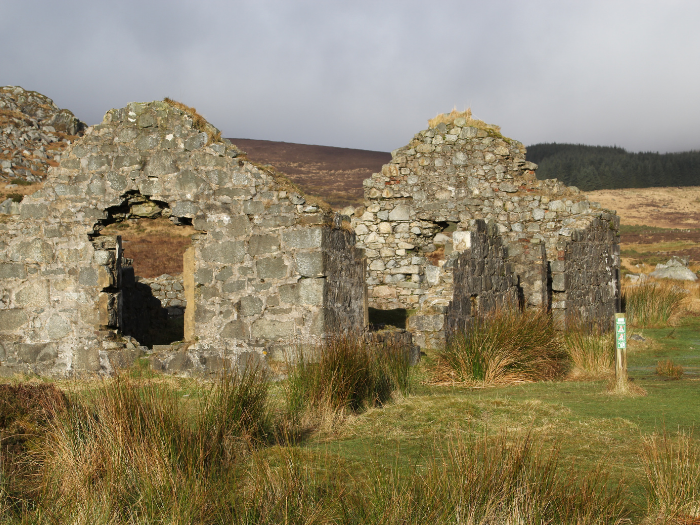 Emigrant derelict cottage. Was this your ancestor’s home?

While on an Ancestry Itinerary, the driver guides will leave no stone unturned. They will take you to the place that your ancestors came from, even if it means driving down overgrown road. They will also negotiate fields of sheep!

Want to learn more? Schedule time to discuss with me here. I can’t wait to help you discover your ancestry!