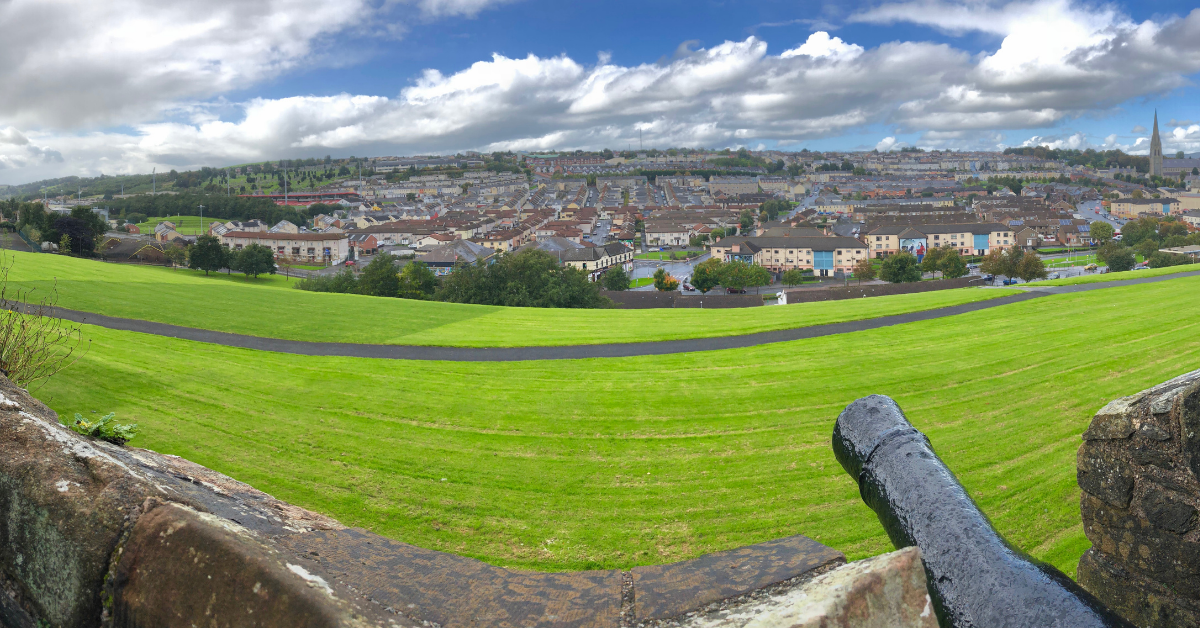 View of Derry, Ireland from the City Walls

When you think of Ireland, most people think of the verdant rolling green hills, the beautiful cities of Dublin and Belfast. But there is another city not to miss in Northern Ireland with the most interesting, enjoyable, and unique experiences: Derry/Londonderry. If you want to know why this city has two names, click here as it is too long of a story for this article! It’s hard to escape the walls in Derry/Londonderry. Then again, why would you want to? Almost 20 feet high and at least as wide, the mile-long oval comes complete with gates, watchtowers, battlements, bastions, and massive cannons.

Derry/Londonderry is the only completely walled city in Ireland and one of the finest in Europe, and the best way to enjoy these stony ramparts is to go slow. Take a walking tour and hear the fascinating stories about brutal 17th-century sieges, starving citizens, and fearsome roaring cannons. Then finish off by crossing the Peace Bridge to Ebrington Square and the Walled City Brewery, where you can raise a glass to this unique city.

Delve into the story of the Armada in Northern Ireland

Dangerous adventures and 16th-century shipwrecks: the Tower Museum makes history with a side of drama. It wasn’t far from Derry/Londonderry to the Donegal coast, where the Spanish Armada’s fourth-largest ship La Trinidad Valencera was lost in 1588. Four hundred years later, divers from the City of Derry Sub Aqua Club found it! Get the grisly details with an audio-visual twist at this award-winning museum.

And if tales of the sea make you long for the sound of the waves, you’re in luck. At Derry/Londonderry, the Wild Atlantic Way meets the Causeway Coastal Route, making the city the perfect base to discover two of Ireland’s great coastal touring routes. 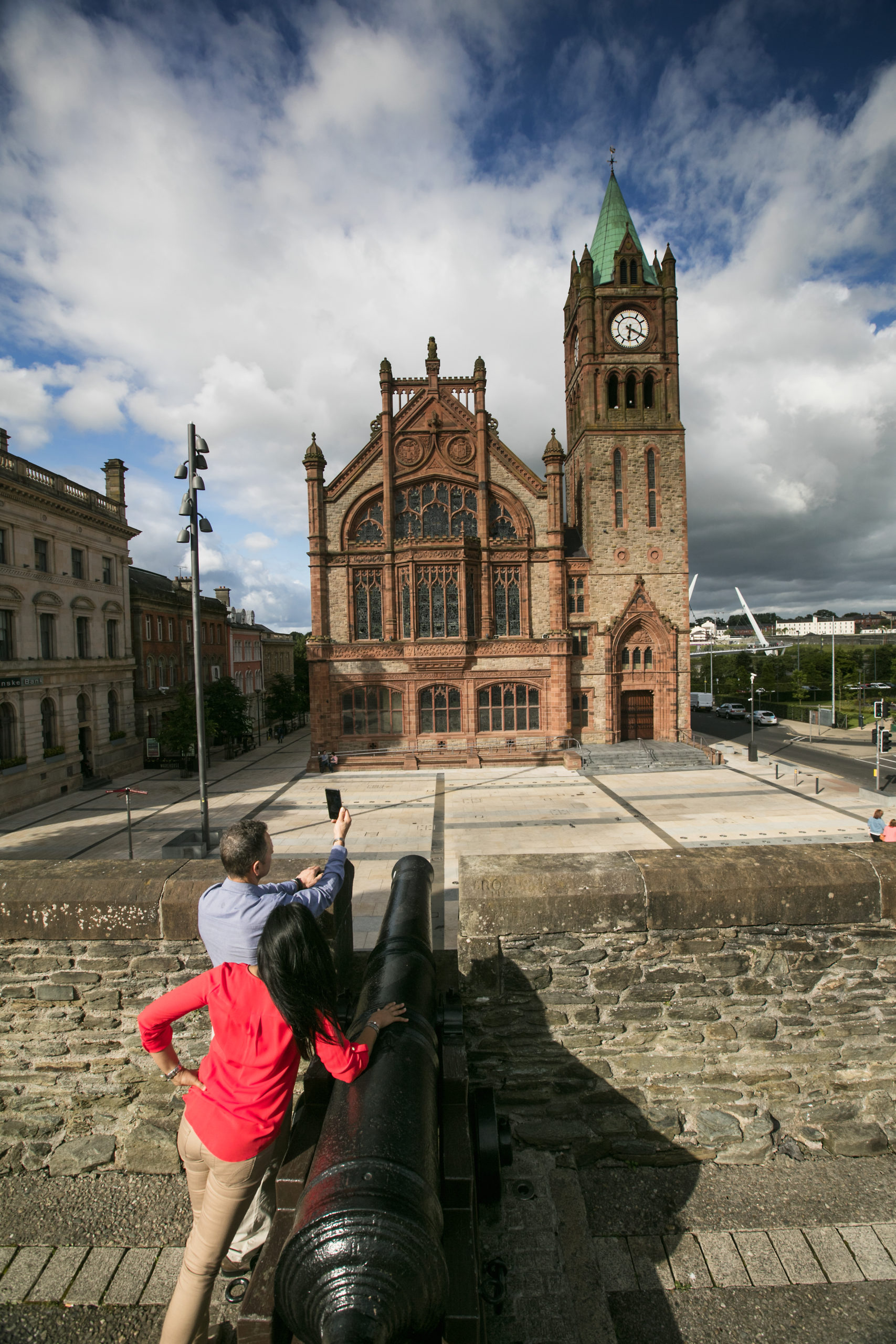 View of the Guildhall in Derry, Ireland. Image Tourism Ireland

Explore the stunning Guildhall in Derry/Londonderry

Are you looking for the most striking building in Derry/Londonderry? You’ve found it. The Guildhall is a red-brick, neo-Gothic wonder on the edge of a picturesque square that’s perfect for a stroll or a snack.

Enter these red-brick walls, and if you’re fortunate, you might catch someone playing on the massive organ.  Let the music move through you as you admire the iconic building’s stunning stained-glass windows.

Talk about resilience; over its 120-year history, the Guildhall has been destroyed and rebuilt – twice! The bright Irish language center Cultúrlann Uí Chanáin showcases the traditional skills of some of the best singers and dancers. You will never forget a performance from here. Nominated for several architectural awards, the outside of the building is as beautiful as the interior. Wander through its zigzag interior, and you’ll see why. If you’re looking for a hidden jewel in this city, you’ve found it. The Craft Village is a cultural hub in the heart of Derry/Londonderry and offers something for everyone.

The village reconstructs an 18th-century street framed by craft stalls, coffee shops, and restaurants. Stroll around the village and taste some of the flavors of Northern Irelan. Pick up a book or some hand-knitted pieces of clothing and soak it all in!

And if you’re lucky, you might even catch one of the many events that the Village hosts throughout the year, from art exhibitions to theater. 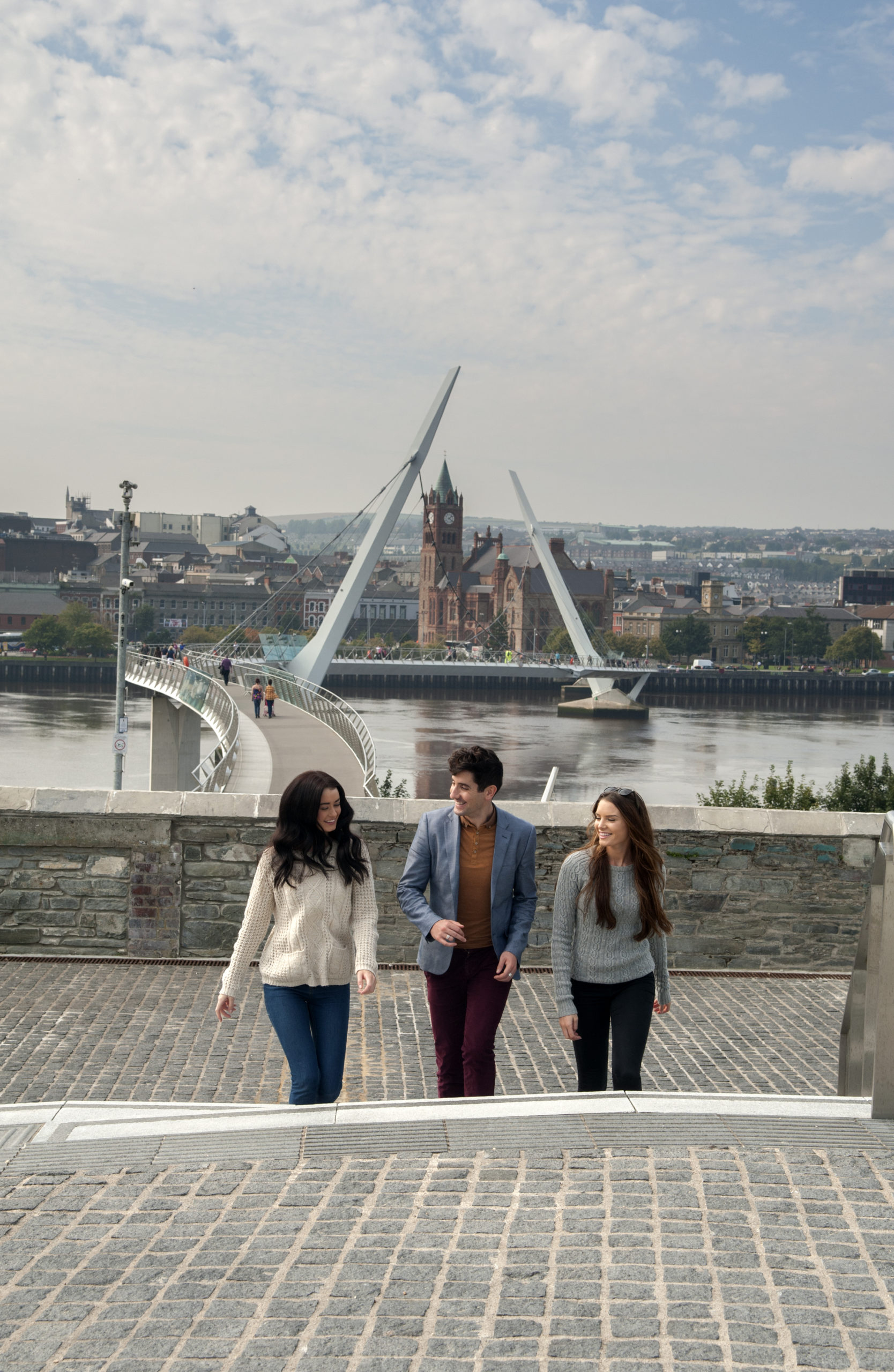 View the city from the Peace Bridge

To look at the city from the water, why not take a walking tour and see the iconic Peace Bridge? Since it opened in 2011, this bridge has won several awards and is a vital link between the two sides of the River Foyle.

Every year thousands line the Peace Bridge pathways to participate in events such as New Year’s Eve celebrations and the Clipper Round the World Yacht Race stopover. Pro-tip: visit the bridge at night to see it lit up spectacularly against the Foyle river. Go back in time at St Columb’s Cathedral

This beautiful cathedral dates back to 1633, making it one of the city’s oldest buildings – it’s a big part of Derry’s fascinating history!

The spire dominates the city’s skyline from every side, and at 221 feet tall, how could it not? Made from the same grey-green stone as the city’s walls, St Columb’s contains dozens of historical artifacts.

Call into the Chapter House Museum on the grounds of the cathedral to see old photos, paintings, and books and get to know the background of this historic city.

Did you know the original keys to the Walled City are in St Columb’s Cathedral?

Throughout the year, Derry/Londonderry has events celebrating the fantastic food and drink offerings. There’s something for everyone. First, there is the Slow Food Festival, where artisan producers, brewers, and chefs showcase all that’s good, clean, and fair in our food scene, including the Lough Foyle Irish Flat Oyster). Then there is the LegenDerry Street Food Festival, where the city center comes to life with food trucks, pop-up bars, and brilliant beats. Sippy Fest, meanwhile, champions local craft brews and spirits to a soundtrack of live bands and DJs. Smaller-scale events and foodie collaborations are around for you to sink your teeth into throughout the year. Find out what’s on at www.legenderryfood.com. How cool is it that Derry/Londonderry has a food website?!

Derry/Londonderry’s history is a rich one, so rich they’ve painted it on the walls. The city’s murals are a keyhole view into a time known widely as “The Troubles.” The artists who painted many of them now conduct guided walking tours of the murals, and as far as living history goes, this is unique.

Delve deeper into the story of Derry/Londonderry at the Museum of Free Derry, where state-of-the-art audio-visual displays offer a fascinating insight into the city’s role in the worldwide civil rights movement.

Did you know, the tradition of painting murals in Northern Ireland dates back as far as 1908. 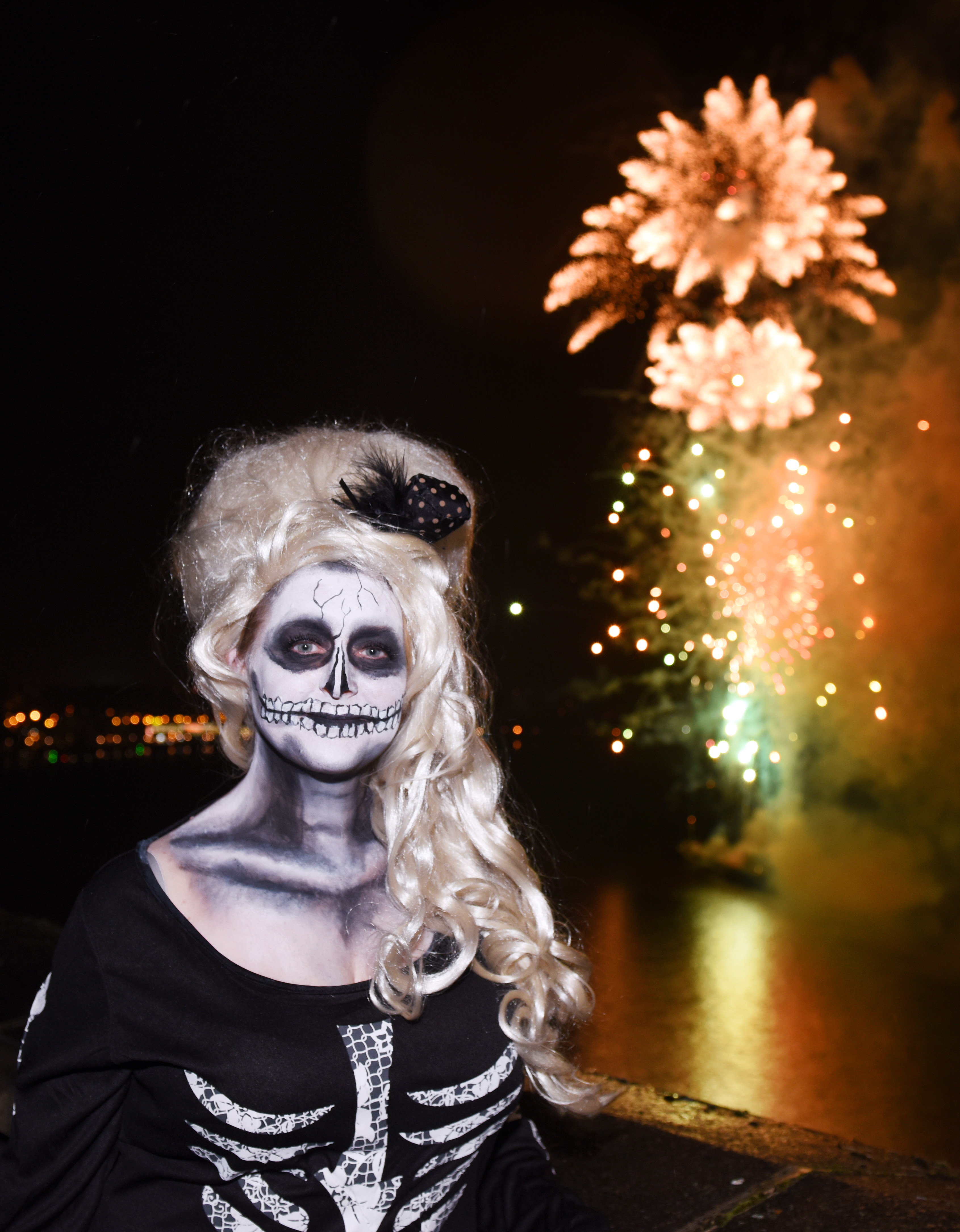 Get spooked at Halloween.

Not for the faint-hearted, DerryHalloween is one of the biggest Halloween celebrations in Europe.

Party with the supernatural at the Gothic Ball – this takes place every year at the Glassworks, a spooky 19th-century church. Go for a spooky stroll through the Awakening of the Walls or take a tour through a haunted house.

One of the big highlights is the Carnival Parade, featuring music, theatrics, and breathtaking performances. Guaranteed to blow those cobwebs away – and if you don’t dress up, you’ll stand out a mile! Did you know Halloween descends from the ancient Irish festival Samhain?

Would you like some assistance crafting the perfect Irish vacation for you? Click here and set up some time so we can chat!

in collaboration with Tourism Ireland.